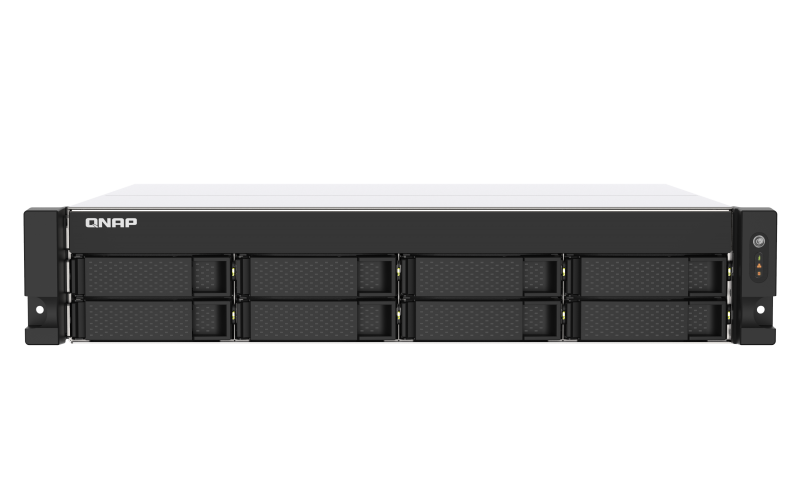 Both 2.5GbE ports are backwards compatible with 1GbE/ 100MbE/ 10MbE speeds. Up to 5 Gbps transfer speeds can be achieved by using port trunking.

Host multiple virtual machines and containers to run a wide range of applications on the TS-873AU-RP.

Absolute performance with AMD Ryzen™ and up to 32GB RAM

Note: Purchase the optional RAIL-B02 rail kit to deploy the TS-873AU-RP in a 19-inch rack following the ANSI/EIA-RS-310-D standard 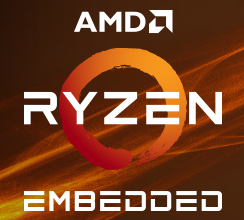 The iSCSI Extensions for RDMA (iSER) protocol boosts the data transfer performance of VMware® ESXi storage and reduces the CPU load of the ESXi server. iSER support can be added to the TS-873AU-RP by installing a QNAP QXG-10G2SF-CX4 10GbE PCIe card, which uses the Mellanox® ConnectX-4 controller. iSER can provide a significant increase in performance, providing an essential tool to optimize demanding virtualization applications.

Note: To create an iSER connection with VMware ESXi, both the server and NAS require compatible Mellanox® NICs and switches compatible with Mellanox® or supporting PFC (Priority Flow Control) configuration.

Regardless of your virtualization needs, you can count on Virtualization Station and Container Station for complete virtualization support. Use the Network & Virtual Switch app to allocate adequate physical network resources to virtual machines, containers, and the TS-873AU-RP to simplify network deployment.

The TS-873AU-RP comes with two 2.5GbE RJ45 LAN ports that allow you to use existing CAT5e cables to upgrade network speeds from 1 Gigabit to 2.5 Gigabit. 5GbE speeds can also be attained by using Port Trunking. To upgrade your laptops and desktops to take advantage of high-speed networks, QNAP offer various adapters and peripherals, including a USB 3.2 Gen 1 to 5GbE adapter (Model name QNA-UC5G1T) and 5GbE PCIe expansion card (Model name QXG-5G1T-111C).


Transform your network with a wallet-friendly 2.5GbE switch

Upgrading your network shouldn’t break the bank, and 2.5GbE connectivity provides immediately noticeable improvements compared to standard 1GbE. The QSW-1105-5T is an unmanaged switch with five 2.5GbE ports (backwards compatible with 1G/100M) and supports CAT5e cables to connect multiple computers and NAS. The QSW-1105-5T is energy-saving, low-noise, plug-ande, and supports loop detection and blocking to provide a simple and effective high-speed network environment.

The TS-873AU-RP includes two PCIe Gen 3 x4 slots, allowing you to add additional functionality with compatible PCIe cards. By using a suitable adapter, you can consolidate both slots into a single PCIe Gen 3 x8 slot.

Note: Compatible with a low-profile graphics card that does not require additional power.

Graphics cards are optimized for graphical calculations and transformations, but require significantly more power than other hardware. The TS-873AU-RP supports entry-level low-profile NVIDIA® GeForce® graphics cards (such as the GT 1030 or GT 1050) that do not require additional power. Installing a graphics card can boost performance of applications such as video editing, 4K video transcoding, imaging processing in QTS and the performance of virtual machines via GPU passthrough.

Adding an SSD cache to the TS-873AU-RP is an easy way to increase IOPS performance and reducing storage volume latency. It is perfect for IOPS-demanding applications (including databases and virtualization) and can significantly improve overall workflows. You can launch, stop, or change settings to meet your needs at any moment without shutting down the system.


Move business data to the cloud flexibly and economically

By deploying cloud storage gateways and enabling local caching on the TS-873AU-RP, you can seamlessly use the cloud for storage, backup, and data recovery with low-latency access, providing an innovative hybrid cloud experience.

Flexibly expand your storage capacity by connecting to cloud storage. You can leverage QTS apps to manage and edit your cloud files or multimedia files. HybridMount is ideal for file server online collaboration and file-level data analysis.

The TS-873AU-RP provides reliable and cost-effective solutions for backup and disaster recovery planning.

With its high performance, huge storage potential, integrated virtualization solutions, and snapshot support that records system status any time, the TS-873AU-RP is perfect for backing up virtual machines.

Use the license-free QNAP NetBak Replicator utility to back up and restore files from Windows® computers. Time Machine® is also supported for backing up Mac® computers.

QNAP provides easy storage expansion solutions. Here are several ways to expand the storage of your TS-873AU-RP to accommodate data and business growth:

Use VJBOD (Virtual JBOD) to expand your storage capacity by using the unused storage of other QNAP NAS. Up to eight QNAP NAS can be mounted as local disks on the TS-873AU-RP.

Migrate to a New NAS

Install your TS-873AU-RP hard drives into a larger QNAP NAS and retain all your existing data and configurations.

2 free camera channels (expandable to 64 channels) are included for you to start using your TS-873AU-RP as a comprehensive surveillance solution.

Consolidates all QTS system events, alerts, and notifications for smooth and easy NAS management, keeping you always informed of your NAS status.

Review the security settings of your TS-873AU-RP and receive recommendations for improvements. Includes anti-virus and anti-malware scanners.

Back up or sync files, emails, calendars and contacts from Google™ G Suite and Microsoft® Office 365® to the TS-873AU-RP to safeguard enterprise cloud data.


Extend hardware warranty up to 5 years

The TS-873AU-RP is backed by a 3-year warranty at no extra cost. If needed, you can purchase a warranty extension to increase warranty coverage up to 5 years.

Note: Use only QNAP memory modules to maintain system performance and stability. For NAS devices with more than one memory slot, use QNAP modules with identical specifications. Warning: Using unsupported modules may degrade performance, cause errors, or prevent the operating system from starting.
* Sound Level Test Environment: Refer to ISO 7779; Maximum HDD loaded; Bystander Position; Average data from 1 meter in front of operating NAS. Designs and specifications are subject to change without notice.