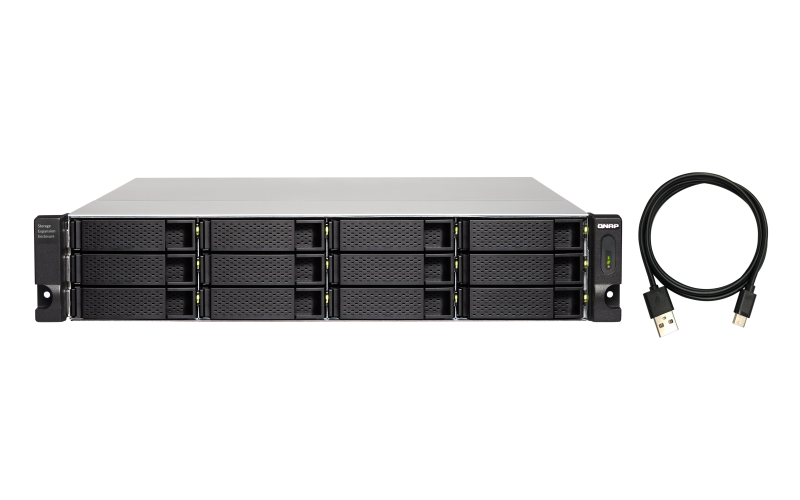 The rackmount TL-R1200C-RP JBOD storage enclosure allows you to back up and expand your QNAP NAS, computers (supports Windows and Mac), and servers. The TL-R1200C-RP features twelve 3.5-inch SATA 6Gb/s drive bays with USB 3.2 Gen 2 (10 Gbps) Type-C connectivity to provide a fast and smooth expansion solution.

The TL-R1200C-RP provides software-controlled configurations for greater management flexibility. Users can configure RAID and monitor disk health using the QTS / QTS hero Storage & Snapshots Manager on a QNAP NAS, or by using the QNAP JBOD Manager utility on their computer. 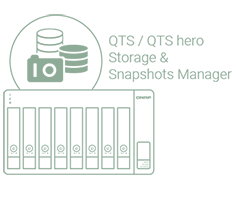 Use the QTS / QTS hero Storage & Snapshots Manager to configure the TL-R1200C-RP as a storage enclosure for your QNAP NAS. The NAS expansion storage mode supports various NAS functions, including storage pools and snapshots. With TL-R1200C-RP, you can easily expand storage capacity. 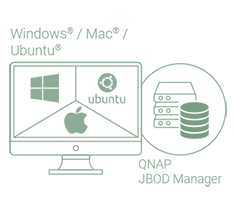 The QNAP JBOD Manager is a desktop utility for monitoring the TL-R1200C-RP on Windows®, Mac®, and Ubuntu® computers. You can quickly obtain disk statuses, JBOD information and health, view fan rotation speed, and check for firmware version updates.


What you need to know

You can connect your TL-R1200C-RP to Windows®, Mac®, and Ubuntu® computers through the USB interface and use built-in utility to manage the RAID configuration.

The QNAP JBOD Manager is a desktop utility for monitoring the TL-R1200C-RP on Windows® and Mac® computers. You can quickly obtain and view information about the JBOD status, health, fan rotation speed, and check for firmware version updates. All device events are recorded, and QNAP JBOD Manager will automatically send system alert notifications to your desktop.

Migrating a large number of small files or a single large data file by network environment can be time-consuming and consume significant network bandwidth that causes decreased work efficiency. The TL-R1200C-RP supports remote file transfer. All you have to do is set up the RAID configuration and store a large number of files. Then you can move the TL-R1200C-RP to another place and connect it with the computer or NAS to experience the device’s simple plug and play feature and fast data migration.

Note: If you have set up the software RAID configuration, the TL-R1200C-RP migration only supports hosts running on the same operating system.

You can treat each disk in your TL-R1200C-RP as an individual storage space, and also use it as a removable drive. It can function like a high-capacity disk drive reader. When one of disk reaches data storage limitation, you can remove it and put it into a dry box. Then swap a different disk into the TL-R1200C-RP empty drive slot. After that, you can install the disk that reached full data capacity into the TL-R1200C-RP and connect it with a computer or NAS for direct file access.

Note: The operating system of the destination host should support the drive file system for file access. For example, NTFS (for Windows), HFS+ (for Mac), EXT4 (for Ubuntu or QNAP NAS), exFAT (for Windows, Mac, Ubuntu, and QNAP NAS) etc.

Note: To achieve UASP, please make sure that your computers and hosts support it.

Extend hardware warranty up to 5 years

The TL-R1200C-RP is backed by a 2-year warranty at no additional costs. You can purchase a warranty extension that extends your warranty coverage up to 5 years.

The TL-R1200C-RP meets many storage expansion requirements for the home and office. Below is a list of potential usage scenarios:


Scenario 2: External storage for your NAS

You can use the TL-R1200C-RP to expand your NAS storage. You can select disks to create storage pools for expanding your NAS capacity, or you can treat each disk as an individual external storage space and use it as a removable drive for greater flexibility. Regardless of the mode you use, you can always use Storage & Snapshots Manager in QTS or QTS hero to set up and manage your TL-R1200C-RP and use hard drive S.M.A.R.T. and Notification Center to check disk status anytime and anywhere.

You can use Storage & Snapshots Manager in QTS or QTS hero to configure the RAID storage pool for your TL-R1200C-RP and expand NAS capacity.

You can treat each disk on your TL-R1200C-RP as an individual storage space and expand your NAS capacity. For example, it will show 8 independent external disks on an 8-bay NAS.


Scenario 3: Expand the storage space of your Windows® and Ubuntu® computers and servers

You can use your TL-R1200C-RP with Windows® and Ubuntu® computers and servers to expand more storage space. You can set up the RAID configuration of your TL-R1200C-RP to further secure data protection. Moreover, you can also use the single disk mode and format with exFAT file system for more convenient access and sharing of files between Windows® and Ubuntu® computers. 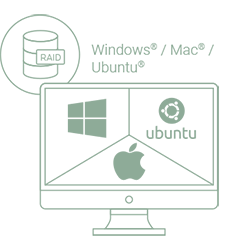 You can obtain data protection by building a software RAID 0, RAID 1, and RAID 5 volume with native utility in your Windows® and Ubuntu® computers, and use the QNAP JBOD Manager to monitor the TL-R1200C-RP status information. 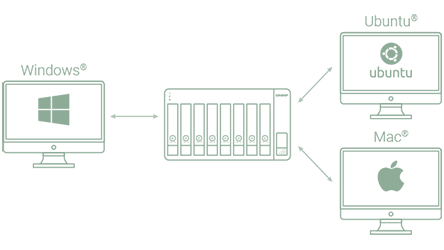 You can format hard drives with the exFAT file system while accessing and sharing files between Windows® and Ubuntu® computers.

Note: Your QNAP NAS can also use the exFAT file system by buying the exFAT driver license from QNAP Software Store.

Note: Use only QNAP memory modules to maintain system performance and stability. For NAS devices with more than one memory slot, use QNAP modules with identical specifications. Warning: Using unsupported modules may degrade performance, cause errors, or prevent the operating system from starting.
* Sound Level Test Environment: Refer to ISO 7779; Maximum HDD loaded; Bystander Position; Average data from 1 meter in front of operating NAS.
Designs and specifications are subject to change without notice.